TOITA impressions: ”It’s a great opportunity for people who want to integrate within the local community. Bring your skills, find out what else you can do and grow. “

It was the year of 1996 when Andrei Nukari moved to Tampere with his family from the capital city of the Republic of Karelia. After carefully debating such a big decision and assessing all risks, the first ones to come here were his grandparents. Not the most common situation given older generations are more resistant to change and can take longer to adapt to a new environment. The pillars of the family had no problem with supporting themselves financially throughout the test period. Once the new “home” proved to be the right decision, the entire family followed. 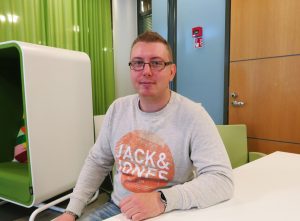 “We had some Finnish friends, and my Father had been working in Finland for a while. He soon concluded there are better working and living conditions in Finland compared to Russia. Perhaps it was easier to accommodate to Tampere because it has a similar population and size to my home city, Petrozavodsk.

I used to play ice-hockey with my cousin, go to sauna and did same activities as Finns. My family has Finnish roots which might explain there was no real culture shock.” Andrei recalls.

Andrei undertook language and integration courses before he could continue his education. At school, other children would bully him by cause of not speaking the Finnish language that well and it added to him not being able to fully integrate into the community during secondary school. However, the circumstances changed altogether when he began going to a vocational school and few years later, to TAMK.

Self-motivated to push past his limits and deal with challenges rather than run away from them, Andrei applied to study Electrical Engineering in Finnish at TAMK and got accepted. In parallel with his ongoing studies, he got curious about the TOITA project. He mentions Marjo Harju (Project Manager at TOITA and Senior Lecturer in Social Services) as his first point of contact:

“She provided me plenty of information about the project. It sounded like a chance to learn more about exporting business overseas, company deals, networking and to practice my English language skills. In time, seeing international professionals working together with coaches on company cases made me realise TOITA is also a great opportunity for people who want to integrate within the local community. Bring your skills, find out what else you can do and grow. “

Andrei’s main skills cover Electrical Engineering and Mechanics. Still, he might just say yes to further studying International Business after he graduates from his current studies. TOITA kept his interest for business alive and gave him legitimate information and skills to pursue his future dreams:

“I have connections in Russia and know the mindset there very well. So I believe I can help Finnish companies exporting their businesses to my home country and Russian companies who show an interest in Finnish markets. Connecting companies is a job that I enjoy doing.”

Remaining hopeful, exploring his curiosity and finding new tools to build his skills and confidence will inevitably increase Andrei’s chances of landing a job in Finland. And as he deals with the unemployment phase, he refuses to be hard-hearted but instead, share some personal discoveries with the world:

“When you’re an adult, you notice you’re being asked fewer questions as when you’re a child. You are expected to be self-aware and sufficient. But if you ever need help, don’t hesitate to ask for it. Not all people will be willing to help you, but eventually, you will find the right ones. Go ahead and ask even if you think it might be a stupid question. If there’s a question on your mind, you should at least try and get an answer. How else will you get something without asking for it?”

I believe we are all the same. We all fear something so staying alone and not speaking to each other is not good. Be kind to yourself and face your fears. Even some of the people I admire with great public and presenting skills have fears. You have to know your weaknesses so that you can improve.”

“I got valuable information and insights on the business culture in Finland. So if I go back to working in the IT industry, the knowledge will come in handy.”

Ali Swadi moved to Finland from Qatar with his family in February 2014 as refugees. Under the refugee quota, Finland accepts persons whom the United Nations High Commissioner for Refugees (UNHCR) has designated as refugees or other foreigners who are in need of international protection for resettlement. The Finnish Immigration Service decides by interviews and documents which refugees are admitted to Finland, and then proceeds in placing them in municipalities which support their integration into the Finnish society. Ali completed an integration plan provided by the local TE Office and passed his Finnish language test from the first attempt.

“I came from the hottest country in the world to the coldest one, but I adapted quickly. I love the people here, and I learned a lot from Finns about punctuality, pre-planning for the next day and sticking to that plan”, he confesses with an enthusiastic voice.

After the integration plan ended, Ali tried to find a workplace, yet all his attempts were not successful yet.  So he registered as a volunteer for the Finnish Red Cross with the intent of giving something back to the community and keeping himself engaged in different activities.

Soon after, one of the social workers from the TE Office contacted Ali and told him about the TOITA project. The social worker was no longer responsible for Ali’s situation, but he cared about him a lot and wanted to see him succeed with his new life in Finland. Thus, he sent Ali an email with all details of the project encouraging him to apply to it. Ali did as told and got accepted.

Funded by the European Social Fund and organised in collaboration with TAMK, TOITA (Talents Of Immigrants To Activity) is a pilot project providing international business education to motivated immigrants. The total teaching period is six months, out of which half is structured as classroom-learning while the other half involves practical training and travelling to companies inside the Pirkanmaa region. The conditions to qualify for this project require holding a professional degree, having a substantial work experience or expertise in an industry of choice and proven language and computer skills.

Ali graduated from the University of Al-Ma’mun with a Bachelor in Information Technology. Back in Qatar, he worked as an IT engineer in a Microsoft environment, controlling and maintaining Windows interfaces for end users, computers and servers. On top of that, Ali speaks three languages: Arabic (mother tongue), English and Finnish (professional level). So why is he unable to find work in the industrial city of Finland? His reply perfectly illustrates the main struggle many immigrants face when looking for a job in Finland:

“A while ago, I heard social media and the news saying that foreigners come here and don’t want to work or contribute to the society. That is not true. We always keep trying to find jobs, but sometimes with no results. And it’s normal to have a weak period, rethink our approaches and then try again. If you spend all your time and efforts on looking for a job and nothing happens, your motivation will go down.

Companies and organisations need to give us a chance to prove ourselves. That’s something we cannot find; it has to be given to us.”

The day he graduated from the TOITA project, Ali endorsed the teaching and coaching methods as being perfect: “Everyone from TAMK provided motivation and encouraged my colleagues and me during the past six months. From our side, we reacted to it in a good way. I got valuable information and insights on the business culture in Finland. So if I go back to working in the IT industry, the knowledge will come in handy.

The only problem was with most companies we visited. They are not ready for internationalisation yet and not aware of other employment alternatives supported by the TE office in regards to job seekers. They have to prepare themselves internally before they can target international markets. And to develop themselves, understand business ways for targeted markets and see the benefits immigrants bring to the country. The experience we bring from our countries of origin does not only benefit us but also the society. We can deliver money from the outside and make the economy stronger. “

The future looks uncertain to Ali and his family who would like to settle down in Finland. They find it safe here and are grateful for the excellent education provided to his two children.

“The school system is great, and I don’t have to worry about my children’s future. I’d be happy to stay here forever if I find work. But if not, I’ll have to go to a new country and be away from my wife and children. Most probably, they’d have to remain in Finland, so my children could graduate from this excellent education they can’t find elsewhere. But let’s hope that I find work and can continue with my life in Finland.”